Israel’s foreign minister was moved to tears when his Swedish counterpart visited Israel in mid-October when Foreign Minister Yair Lapid saw documents showing how a Swedish diplomat saved his father from the Holocaust. 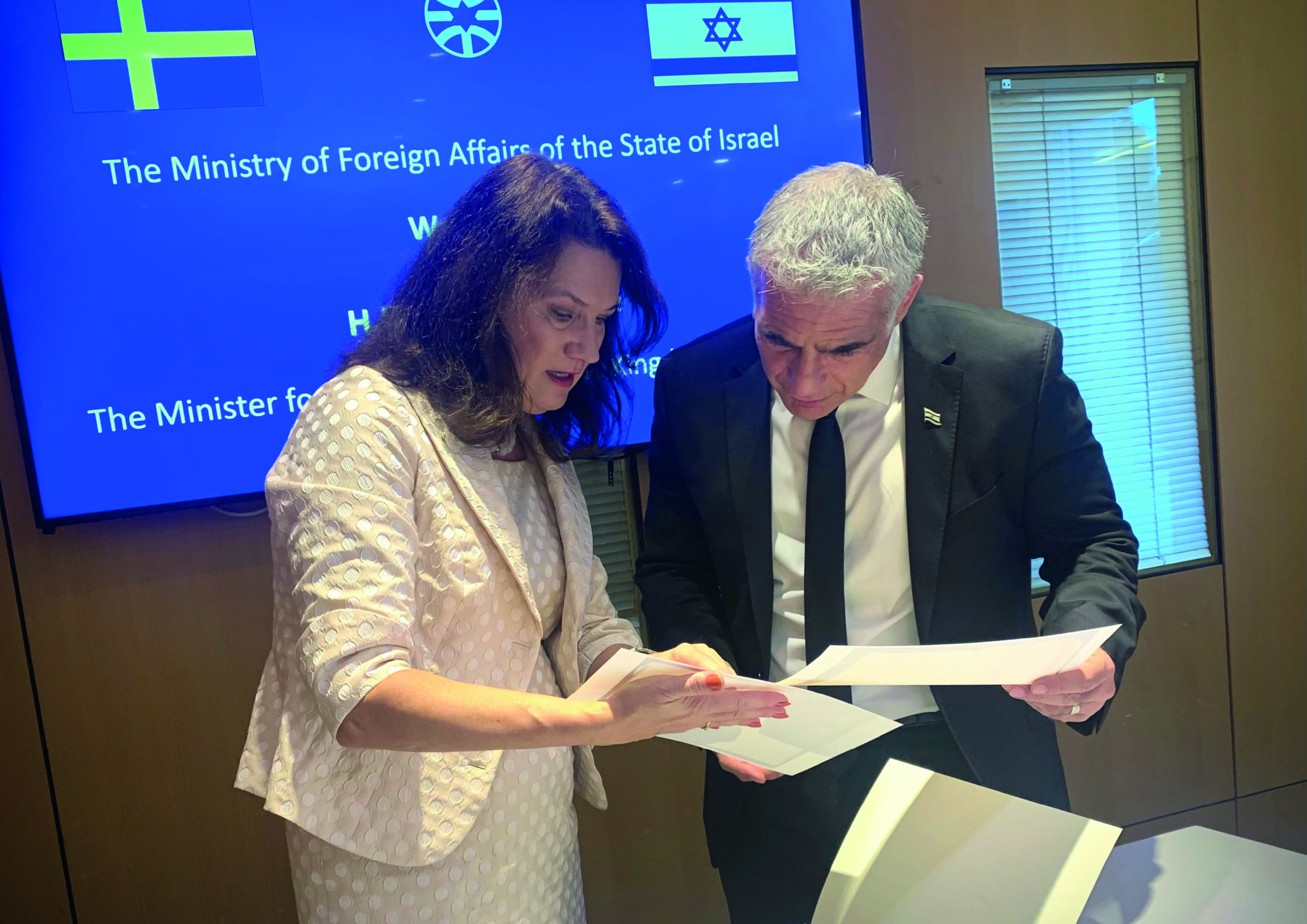 In October this year, a Swedish foreign minister met their Israeli counterpart in Israel for the first time in 10 years. Photo: UD

The Swedish diplomat Raoul Wallenberg was in focus when Israel received a Swedish Foreign Minister for the first time in ten years this October. During a meeting in Jerusalem with her colleague Yair Lapid, Sweden’s Foreign Minister Ann Linde showed copies of pages from Swedish diplomat Raoul Wallenberg’s notebook from his time in Budapest during the Holocaust. The notebook had a list of names of Jews who Wallenberg managed to obtain passports for and so was able to save. One of the names was “Josef Thomas Lempel”, the father of Yair Lapid, who after he was rescued, moved to Israel where he became a journalist and politician by the name of Tommy Lapid. Yair Lapid underlined that Raoul Wallenberg provided Swedish immunity for his father and grandmother, took them under his wings and saved their lives. “Without a brave Swedish diplomat, I wouldn’t have stood here today,” said the Israeli Foreign Minister during the meeting. Ann Linde, who also met President Yizhak Herzog during her visit to Israel, was met with an air of cordiality that has long been lacking in Swedish Israeli relations.

Thanks to his heroic efforts to save Hungarian Jews in the final stages of World War II, Raoul Wallenberg has become an honorary citizen of the United States, Canada, Hungary, Australia and Israel. The Yad Vashem Holocaust Museum in Israel has also named Wallenberg one of the “Righteous Among the Nations.” Monuments, street names, stamps and memorial sites around the world have attracted attention to the Swedish diplomat. Relations between Israel and Sweden deteriorated in 2014. After a few weeks in power and as the first EU country after the collapse of the Soviet Empire, the Swedish Social Democratic government decided in October 2014 to recognize the Palestinian state and at the same time increase its financial grants to the Palestinian Authority. The conflict escalated when Foreign Minister Margot Wallström early in 2016 accused Israel of extrajudicial killings of Palestinians. The month previously, Wallström had apologized for the terrorist attack in Paris, that targeted the Bataclan concert venue, “Here, once again, we are brought back to situations like the one in the Middle East, where not least, the Palestinians” see no hope for a future, and that “we must either accept a desperate situation or resort to violence,” said the Foreign Minister on Swedish Television.

“This accusation was made on three separate occasions and it happened when we were exposed to a series of terror attacks, when cars exploded, when knife attacks were striking the population and when we defended our civilians against these things,” said Isaac Bachman, Israel’s ambassador to Sweden at the time. “No one has officially mentioned these Palestinian terror attacks. There were no written denunciations by the government, they simply pretended not to notice them. While we were in the very act of burying our dead, these accusations came from Sweden. It’s probably hard to understand how the statements were perceived in Israel. This happened at the same time as the terrorist attack in Trollhättan where the perpetrator was immediately shot dead with 2-3 rounds. Then the police officers were praised by Swedish ministers”, he emphasized. At the end of 2016, Palestinian President Mahmoud Abbas decorated Sweden’s former Foreign Minister Margot Wallström with the medal “Grand Star of the order of Jerusalem” at his office in Ramallah on the West Bank. According to the rules, the order is awarded to a soldier “for outstanding service”.