A diplomatic conflict between Israel and Poland escalated in August after Poland passed a law preventing Holocaust survivors from reclaiming their property. The law does not only target Polish Jews but Poles in general, and anti-Semitic rhetoric was used while the law was discussed 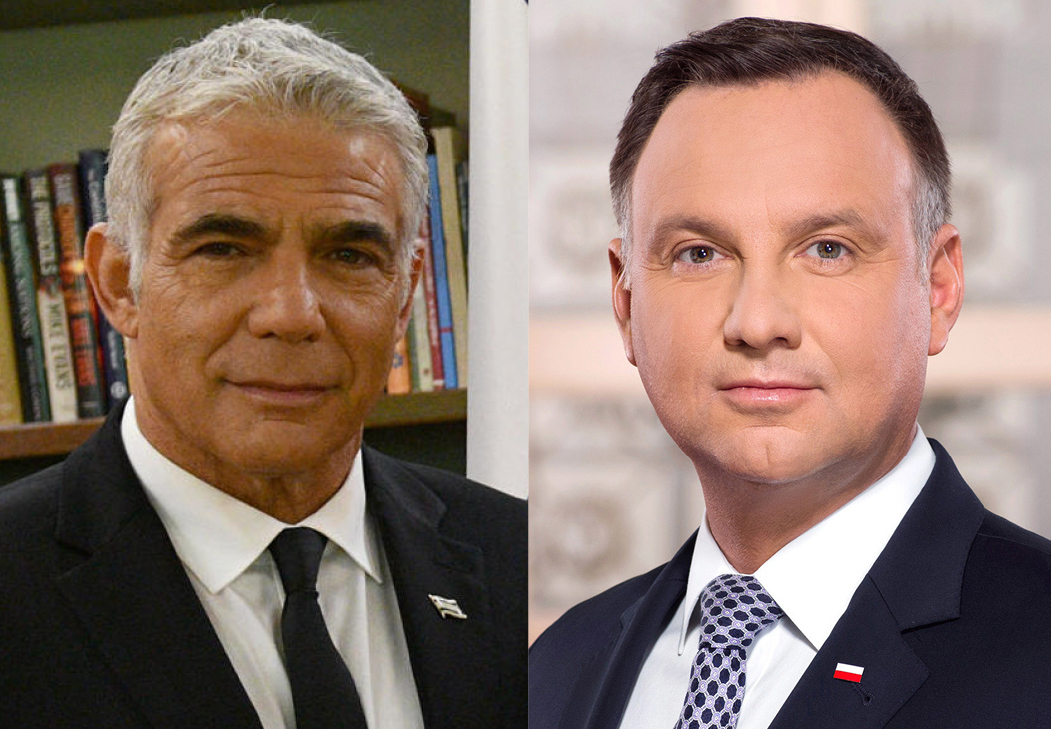 Israeli Foreign Minister Yair Lapid (left), whose father was rescued from the Holocaust by Raoul Wallenberg in Budapest, condemned the law preventing Holocaust survivors from reclaiming their property, as soon as it was signed by Polish President Andrzej Duda (right). Photos: Haim Tzach / Jakub Szymczuk

When communism fell in 1989, reclaiming family property was made possible, but the new law now states that all administrative decisions made 30 years ago or more can no longer be questioned. This means that those who were deprived of real estate or companies during the communist era and earlier, can no longer demand compensation. Israeli Foreign Minister Yair Lapid, whose father was saved from the Holocaust by Raoul Wallenberg in Budapest, condemned the law as soon as it was signed by Polish President Andrzej Duda. – Tonight, Poland has become an anti-democratic and non-liberal country that does not respect the greatest tragedy in human history. We must never be silent. Israel and the Jewish people will definitely not be silent – said Israeli Foreign Minister Yair Lapid in a statement hours after the Polish decision. – Today, Poland – not for the first time – approved an anti-Semitic and unethical law. Tonight I instructed the Chargé de-affaires at the Israeli Embassy in Warsaw to return immediately to Israel for consultations indefinitely, he continued.

At the same time, Yair Lapid announced that Israel’s new ambassador to Poland, soon to go to Warsaw, would not leave for Poland at the moment. Simultaneously, the Ministry of Foreign Affairs recommended that the Polish ambassador to Israel stay on holiday in his own country. “This time should be used to explain to the people of Poland the significance of the Holocaust for the citizens of Israel and the extent to which we will refuse to tolerate contempt for the memory of the Holocaust and its victims,” said Foreign Minister Lapid. Meanwhile, Polish Prime Minister Mateusz Morawiecki defended the new legislation, saying it would end a period of criminal abuse in his country. Modern research shows that thousands of Poles risked their lives to help Jews during the Holocaust, while thousands of other Poles actively participated in the Holocaust. Poland has more people then than any other nation – over 7,000 – who’ve received “Righteous Among the Nations” award by the Holocaust Museum Yad Vashem, which Israel uses to honor non-Jews who risked their lives to save Jews during the Holocaust.

The latest major diplomatic crisis between Israel and Poland erupted in 2018 when Warsaw passed a law which many in Israel saw as an attempt to suppress discussion about crimes committed by Poles against Jews during the German occupation in World War II. So far, the law has not been implemented but in February this year a court in Warsaw ruled that Barbara Engelking and Jan Grabowski, editors of a book on the Holocaust, must apologize for reproducing in their book claims from villagers that Mayor Edward Malinowski handed over Jews to the Nazis. A higher court ruled in early August that the two Holocaust researchers did not need to apologize. Poland had a Jewish population of about 3.3 million before the systematic extermination in connection with Nazi Germany’s occupation of the country wiped out the lives of about three million of these Jews. The death camps at Auschwitz, Beltzec, Chelmno, Sobibor and Treblinka – where most Jews were murdered during the Holocaust – were all in Poland because most of the victims were there.

After World War II, only about 300,000 Jews remained in the country. Many of the Polish Jews who survived the Holocaust were subjected to violence and persecution by the Polish people which caused many of them to emigrate. Others hid their Jewish identity for fear of persecution. In 1968, only 25,000 Jews were left in Poland. In March of that year, the Communist regime launched an anti-Semitic campaign that led to the emigration of some 13,000 of these after being harassed in workplaces and universities. The campaign began shortly after the Six-Day War in 1967. Until then, the Soviets had enjoyed good relations with Israel. When Israel defeated the Arab states, the allies of the Soviet Union, it sparked an anti-Israel campaign which in Poland also became anti-Semitic. In Poland, this was mixed with old church anti-Semitism, along with a Polish nationalism.