The synagogue in Abu Dhabi includes a church and a mosque

Pope Francis and Gand Imam Al-Tayeb from Egypt were present when the first step towards building an interfaith complex in Abu Dhabi was taken. Jewish believers hade to content themselves with being represented by a rabbi who lived in the 12th century. 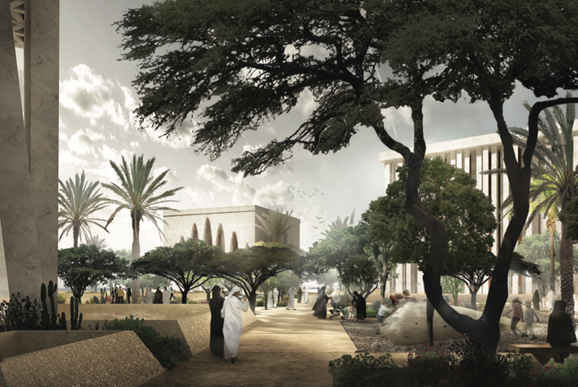 The format of the interfaith project was revealed by the UAE Foreign Minister at a global meeting in New York in 2019. Photo: Abu Dhabi Government Media Office

In 2022, the United Arab Emirates will inaugurate a building complex in the capital Abu Dhabi that encloses a synagogue, a mosque and a church. The government has announced that the mosque will be named “Imam Al-Tayeb Mosque” after the Egyptian Grand Imam who signed the agreement, while the church will be named “St. Francis Church” after the Grand Imam’s counterpart, Pope Francis. The synagogue on the site will be named “Moses Ben Maimon Synagogue” after a Jewish philosopher and rabbi who lived in the 12th century. The interfaith complex has been given the shared name “The Abrahamic Family House”. “The Abrahamic Family House epitomises interfaith harmonious coexistence and preserves the unique character of each religion,” said Mohamed Khalifa Al Mubarak, chairman of the Abu Dhabi Department of Culture and Tourism, according to the Times of Israel.

The Abrahamic Family House is inspired by a joint statement signed by Pope Francis and the Grand Imam Sheikh Ahmed el-Tayeb on February 4, 2019 in Abu Dhabi, United Arab Emirates. Thus, no Jewish representative signed the statement called the “Document on Human Fraternity for World Peace and Living Together” or in short, the “Abu Dhabi Agreement”. In this spirit the three places of worship that make up the Abrahamic Family House will welcome visitors from all over the world to worship, learn, and engage in dialogue. In addition, the complex will offer a variety of daily programs and activities and will host international conferences and world summits that promote harmonious coexistence within communities.

The format of the project was revealed by Sheikh Abdullah bin Zayed Al Nahyan, United Arab Emirates Foreign Minister, at a global gathering in New York in 2019 where it was presented to Pope Francis and Grand Imam Sheikh Ahmed el-Tayeb during a meeting in November 2019. “As a place of learning, dialogue and worship, the Abrahamic Family House will be a cultural landmark and an inspiring global symbol that symbolizes the shared values of harmonious coexistence and understanding between the three Abrahamic beliefs Judaism, Christianity and Islam,” writes the Abu Dhabi Government Media Office on its website.