Previous Next
The Jewish wedding

Today’s Jewish wedding ceremony consists of two older ceremonies that were once held about a year apart: the Erusin, or betrothal, and the Nissuin, the actual marriage. Since the Middle Ages, these ceremonies have usually been held at one and the same time. 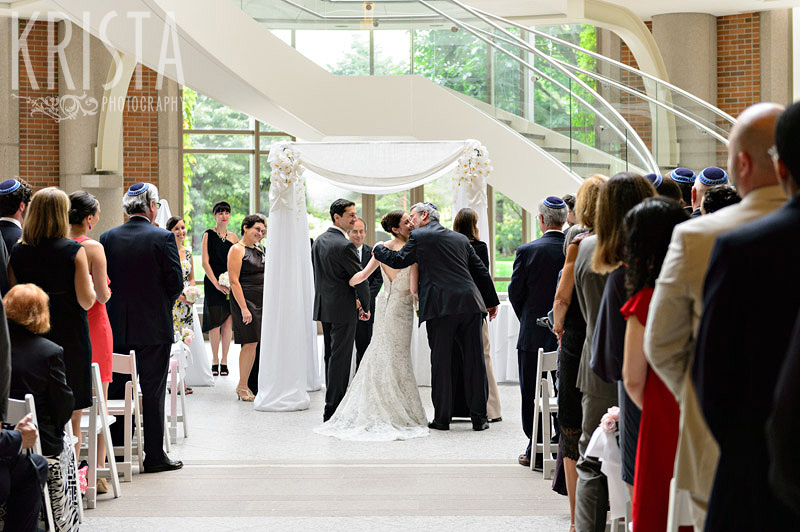 The Jewish wedding ceremony takes place under the chuppah, a wedding canopy that symbolizes that the home to be built by the bride and groom will be open on all sides to welcome guests. Photo: Krista Guenin

It is common for the groom and bride not to meet in the week before the wedding.
Ashkenazy Jews have a custom that before the ceremony the groom covers the bride’s face (usually with a veil) reminding those present of how Jacob was tricked by Laban into marrying Leah before Rachel, because Leah’s face was covered by her veil. In addition, the veil emphasizes that the groom’s main focus is not the beauty of the bride, which fades with time, but the inner beauty she never loses.

The wedding ceremony itself takes place under the chuppah, a wedding canopy with four open walls, symbolizing that the home the bride and groom will build together must be open on all sides to welcome guests.
The bride and groom are usually escorted to the chuppah by their parents. In Orthodox Jewish communities, the bride is often escorted by both mothers while the groom is escorted by both fathers. The bride and groom may also be escorted separately by their respective parents or by any married couple.
The rabbi or cantor who officiates at the wedding then reads the blessing over the wine and over the betrothal. The wedding couple then drink wine from a goblet.

Moses and the Law of Israel

The groom then usually gives the bride a ring and says in front of two witnesses in Hebrew: “You are now betrothed to me according to the law of Moses and Israel”. Then follows the reading of the ketubah (marriage contract), which is written in Aramaic and describes the husband’s obligations towards his wife. The document is signed by two witnesses and becomes the bride’s possession, which is often displayed in the home as a framed picture.
During Nissuin, the rabbi also reads the Sheva brachot (seven blessings) over a cup of wine. These are thanksgivings to God and prayer for the bride and groom to be united forever and for the Temple to be rebuilt. Then the bride and groom drink from the cup.
Next, a glass is placed on the floor and the groom crushes it under his foot, a symbol of grief over the destruction of the Temple. The wedding ceremony is over now, and everyone shouts “mazal tov!” which means Congratulations!

After the wedding ceremony, the bride and groom are often escorted to the cheder yichud (a private room) where they are left alone for a few minutes to mark the couple’s new status as husband and wife and their new life together.
The bride and groom then make a grand entrance to a room filled with friends and family to begin the celebration, the big party, which then begins with singing, exuberant dancing, lots of food and great joy. The dance is an important part of a Jewish wedding, and it is common for the guests to dance in front of the seated couple.
After the meal, the Sheva brachot, the seven blessings, are read once more over the wine.

At the Sabbath celebration in the synagogue every Friday night, the Sabbath is welcomed as a bride by the congregation. The wedding is the most solemn occasion in life and the Sabbath is therefore compared to the bride.