The National Day of Remembrance for Fallen Soldiers in Israel, Israel’s Independence Day and Palestinian Nakba are important dates linked in various ways to the foundation of the State of Israel in 1948 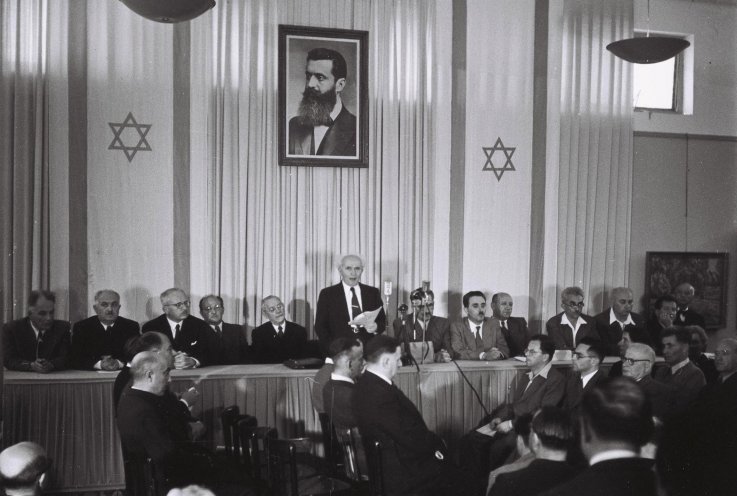 In his declaration of independence in 1948, David Ben-Gurion referred to the Balfour Declaration in November 1917, the resolution by the League of Nations in July 1922 and the UN Partition Plan in November 1947. Photo: GPO

Yom HaZikaron, the Day of Remembrance for Fallen Soldiers, which now also includes Israeli civilians killed in terrorist attacks in Israel, is held on the 4th of the month of Iyar, one week after the Day of Remembrance for Holocaust victims. In the evening when the Day of Remembrance begins at 20.00, and on the following morning at 11.00, sirens sound throughout the country. All of Israel stands still in silence for two minutes to show their respect and tribute. Even cars out in the traffic stop and drivers and passengers get out and stand quietly next to their vehicle. The day after Yom HaZikaron, Yom HaAtzmaut – Independence Day – is celebrated. Israel’s National Day is celebrated in memory of the Israeli declaration of independence on May 14, 1948, which took place eight hours before the end of the British Palestinian Mandate on May 15 that year.

In his proclamation of the state, David Ben-Gurion referred to the natural and historical rights of the Jewish people and to the resolution by UN General Assembly. He concluded by declaring the establishment of a Jewish state in Eretz Israel, to be known as the State of Israel. The new state was quickly recognized by the United States, the Soviet Union and many other countries, but not by the surrounding Arab states, which instead declared war on the infant state and so created the Palestinian refugee situation. Nakba-day on May 15, the Palestinian day of mourning for the formation of the state of Israel, generally follows the Gregorian calendar and therefore usually does not take place in conjunction with Israel’s Day of Independence. The emphasis on Nakba has been criticized for failing to provide a stronger national identity for Palestinian citizens as a basis for nation-building.