A misjudgment of security policy nearly led to Israel losing the war launched by Egypt and Syria in October 1973. Israel initially lost the Golan Heights and virtually all of Sinai, before the war turned. 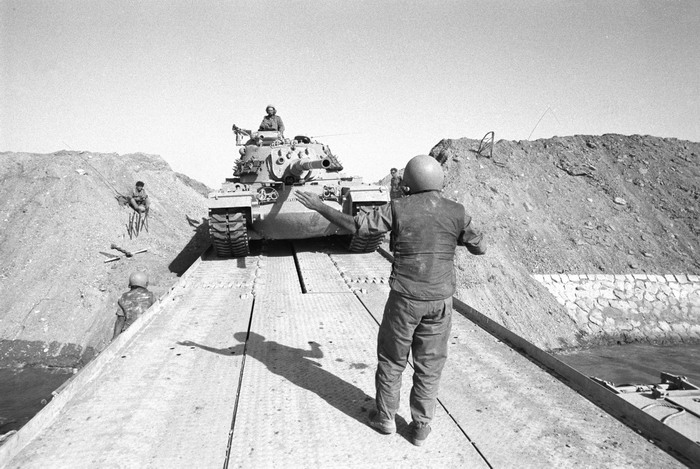 The Yom Kippur War–or October War–was fought 6–25 October 1973 between Israel and a number of Arab states led by Egypt and Syria. The fighting took place primarily on the Sinai Peninsula and the Golan Heights, regions that had been conquered by Israel while defending itself in the Six Day War, six years earlier. The Six Day War was preceded by a major Soviet rearmament of the Egyptian military forces, while Sadat repeated his threats of war against Israel, and Egypt conducted large-scale maneuvers to test Israel’s readiness. During the conflict, the United States provided Israel with weapons while the Soviet Union provided military aid to the Arab countries, leading to heightened tensions between the two major powers. The Yom Kippur War began with the Arab coalition launching a surprise attack on Israel on Yom Kippur, the Day of Atonement, the most important Jewish festival. Egyptian forces took virtually the entire Sinai Peninsula without meeting resistance before Israel three days later mobilized its forces and stopped the Egyptian offensive.

At the same time Syria launched an attack on the Golan Heights, initially making great strides in northern Israel. After three days of fierce fighting, Israeli forces had driven back the invaders and then launched a counter-offensive far into Syria. Within a week, Israeli artillery began shelling the outskirts of the Syrian capital, Damascus. Egyptian President Anwar Sadat launched another offensive against the Israelis to improve his position ahead of the forthcoming peace talks, but the attack was quickly repelled, and Israeli General Ariel Sharon was able to cross the Suez Canal with his forces and surround Egypt’s Third Army just 100 kilometers from Cairo. In connection with the Camp David Accords in 1978 and the peace treaty with Egypt the following year, Israel handed the entire Sinai Peninsula over to Egypt, which then became the first Arab country to recognize Israel as a legitimate state. In the weeks following the war, the Arab world’s oil ministers took a decision to hold back oil production in order to put pressure on the Western world. The ensuing oil crisis prompted many countries to re-evaluate their Middle East policy in favor of the Arab world. Both Egypt and Syria predicted that the oil boycott would help them in the post-conflict peace talks.

Just before the war broke out, the Israeli Intelligence assessment was that the probability of war was small. Although the actual Arab war plans were known, it was thought that the Arabs were not serious about them. Several warnings about an impending war – including a warning to Golda Meir from King Hussein of Jordan – were ignored by Israel. When Israeli Prime Minister Golda Meir learned of the imminent attack, she made the controversial decision not to launch a pre-emptive strike because the United States demanded that Israel not start the war. Only hours before the attack began did orders go out for a partial mobilization of the Israeli reserves. During the first days of the war, the Israeli government and military feared that without a decisive victory on at least one front, the world would no longer believe that the Jewish state could defend itself – according to previously classified documents from government meetings released by the Israeli Ministry of Defense in early 2021. The documents were released a few months after the premiere of the TV series Valley of Tears, which in ten episodes depicted the Yom Kippur War, also known as the October War, and the events in the month after the war. In total, more than 2,500 Israeli soldiers died, and thousands were injured in the fighting, while an estimated 10,000 Egyptian and Syrian soldiers were killed.