Previous Next
Temple sacrifices to Zeus led to rebellion

The Maccabean Revolt began after Antiochus IV Epiphanes built an altar to the Greek god Zeus in the temple at Jerusalem. The Maccabees succeeded in reconquering the temple, cleansing it, and rededicating it. This event is celebrated today as the Jewish holiday of Chanukkah, the Feast of Dedication of the temple. 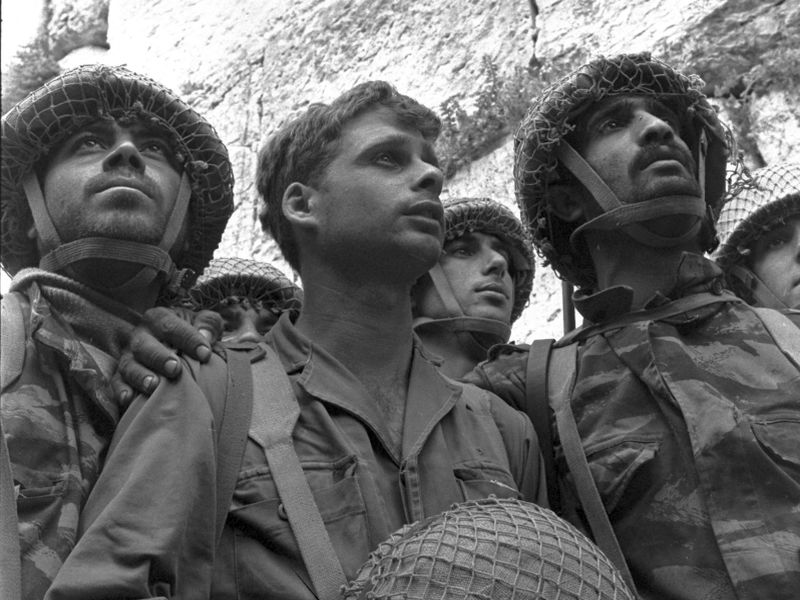 Israeli soldiers at the Western Wall of the temple site in 1967 when Israel occupied eastern Jerusalem during the Six-Day War. Photo: David Rubinger, GPO

More than 2,000 years ago, the world powers Babylon, Medo-Persia, Greece and the Roman Empire took turns occupying Israel. The Babylonian king Nebuchadnezzar II, the Persian king Cyrus the Great, Greek king Alexander the Great, and the Roman general Pompey, conquered Jerusalem in turn, which caused a range of consequences for the city’s religious services. About 200 years after Persia conquered Babylon (when the Jews were allowed to return to Israel from the Babylonian captivity to rebuild the temple), Israel was conquered by the Greek general Alexander the Great. While the country was occupied by Greece, a Hellenization of the area began which reached its peak almost 150 years later when Antiochus IV Epiphanes came to power. The first of the Books of the Maccabees – which depict Jewish history during the last two centuries before the birth of Jesus – describes how a number of Jews at this time began to abandon the law and that they drew many with them. “Let us draw near to the Gentiles who live around us and make a covenant with them,” they reasoned, according to the first Book of Maccabees.

Intruded into the temple

After defeating Egypt, following six years in power, Antiochus turned against Israel and Jerusalem. He entered the temple, took the golden altar, the table of showbread, the cups and the bowls for the drink offerings, the golden censor for incense, the veil and the gold ornamentation on the facade of the temple. Antiochus commanded his entire kingdom to become one people, abandon their own laws and customs, and to abide by the religious laws he prescribed which involved sacrificing to Greek gods and desecrating the Sabbath. Circumcision was forbidden and burnt offerings, food offerings and drink offerings were abolished. In their place the king built an altar to the Greek god Zeus in the temple at Jerusalem. In this situation, the priest Judas Maccabaeus and his sons organized a resistance movement that came to be known as the Maccabean Revolt. In 164 BCE, the Maccabees succeeded in conquering the temple and rededicating it. This event is celebrated today as the Jewish holiday of Chanukkah, the Feast of Dedication of the temple. The Maccabean kingdom lasted for about 100 years, until the Roman conquest of Jerusalem.

When Daniel was in the Babylonian captivity several hundred years earlier, he foretold in detail the rise of Antiochus IV Epiphanes, as described in the book of Daniel in the Bible, chapter 11, ‘And forces shall be mustered by him, and they shall defile the sanctuary fortress, abolish the daily sacrifice and set up the abomination of desolation.’ NKJV It would then take until 1948 before the Jews regained their independence with the founding of the state of Israel. The whole of Jerusalem was retaken during the Six Day War in 1967 and on July 30, 1980, the Israeli parliament, the Knesset, adopted the Jerusalem Law, which determines that the whole of Jerusalem is the capital of Israel, the seat of the Government, the President of the State, the Government Buildings, the Supreme Court and the Knesset. The issue of Jerusalem’s status is today the single most important world political issue with stakeholders such as the EU, the UN, Russia and the United States (the so-called International Quartet), but also the Arab League, the Islamic Conference and the Vatican City State.