Film distributor Netflix recently announced its release of 32 movies in the “Palestinian Stories” category. This category contains movies that have been produced by BDS supporters. 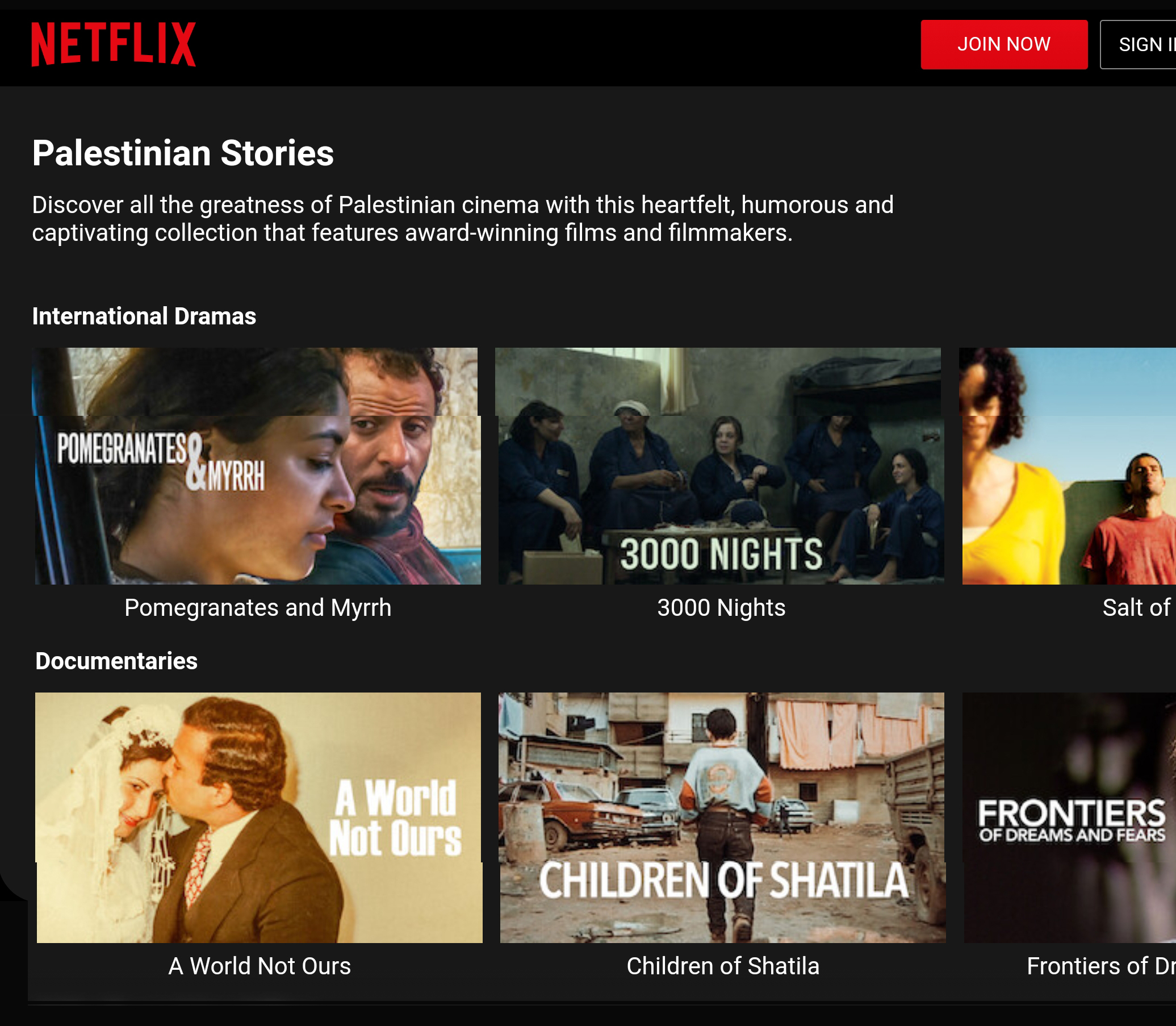 Nine out of ten of the Palestinian films shown by Netflix were directed by BDS supporters. Screenshot: Netflix

A Netflix spokesperson confirmed to the Jerusalem Post that some of the content, such as the Oscar-nominated short film “The Present by Farah Nabulsi” – which was already available on Netflix – has been relocated to the “Palestinian Stories” category. The category has drawn criticism from Israelis, which raises questions as to whether it violates the company’s policy of releasing films in Israel by directors supporting the BDS movement – who advocate a cultural and economic boycott of Israel. The Israeli non-governmental organization (NGO) Im Tirtzu has investigated the film directors in the Netflix category “Palestinian Stories” and found that of the 19 directors who made the films, at least 15 have expressed their support for BDS. Despite their support for the boycott movement, these directors have not denied or expressed an objection to the films being shown on the Israeli Netflix service, the Jerusalem Post writes. Ameen Nayfeh, director of one of the films included in Palestinian Stories, told Reuters he was happy they could be viewed in Israel: “That’s why we make films, because we want our stories to travel, we want people to know about us. Now as you type Palestine in the search field on Netflix, you will see many titles that you can watch. Before, when I wrote Palestine, I got Israeli titles.”

Calls for a boycott

Earlier this year, Nayfeh and a number of Netflix directors signed a statement in response to the Gaza war in May, urging governments to “cut trade, economic and cultural relations with Israel” and call Israel “an apartheid regime.” Since its launch, Netflix has invested in dozens of Israeli titles and recently released an official statement on Twitter and Instagram stating its stance against anti-Semitism: “We stand united against anti-Semitism in all its forms, including the worrying rise of hate crimes and denial of the Holocaust. We must never forget that frightening chapter in human history”. The boycott movement BDS has been classified by the German Bundestag as anti-Semitic. A resolution passed by German parliamentarians stated that certain BDS slogans were reminiscent of Nazi Germany’s “Do not buy from the Jews” propaganda. A large majority in the US House of Representatives also voted in favor of condemning the BDS movement. The resolution stated that the BDS movement “undermines the possibility for a negotiated solution… by encouraging the Palestinians to reject negotiations and instead rely on international pressure.”